The Eastern Valley is the densest urban portion of the Valley and contains a great deal of commerce. From Burbank to North Hollywood, you’ll find some of Hollywood’s largest studios and sound stages, not to mention a plethora of small post-production firms, scattered amongst the 1950s suburbs.

Burbank is an incorporated city in the San Fernando Valley and is home to more than 100,000 people. It encompasses two areas, a downtown, civic center, and residential neighborhoods that dot the slopes and foothills of the Verdugo Mountains. It is often referred to as the “Media Capital of the World,” as there are many entertainment companies headquartered in Burbank. It’s named after a New Hampshire born entrepreneur and dentist, Dr. David Burbank, who first purchased over 10,000 acres in the area in 1867. 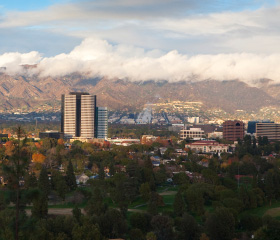 Burbank was formally incorporated as a city on July 8, 1911, following steady growth throughout the late 1800s. The development of the Burbank airport in the 1930s brought the aircraft industry to the area. Manufacturing also plays an important part in the history of the city, though the area is most noted for the entertainment business. Burbank is home to a number of major film and television studios, including Disney, Warner Brothers, and NBC. Hundreds of films have been shot in Burbank, with Casablanca being perhaps the most famous of them all.

There are some legendary spots in Burbank, including Bob’s Big Boy Restaurant on Riverside Drive, which was established in 1949 and is the oldest remaining Bob’s in America. Burbank is also home to The Los Angeles Equestrian Center and the Burbank Philharmonic Opera, giving residents and visitors plenty of entertainment options. The downtown area provides a plethora of dining and entertainment activities for the whole family, from movies to shopping and from fast food to fine dining. The most famous neighborhoods in Burbank fall into what is known as the Rancho Equestrian District, where neighborhood zoning actually allows residents to keep horses in their backyards. There are very few multi-family or apartment-style homes in the area, making it extremely residential in appearance. Burbank also has a large and well-appointed hospital, the Providence St. Joseph Medical Center. It was one of the largest hospitals located in the San Fernando Valley.

In the 1920s, a man by the name of Mack Sennett relocated his studios to a location close to Colfax Avenue and Ventura Boulevard, giving rise to the name Studio City. These same studios are now referred to as CBS Radford and are part of the CBS family. It is a seven-square-mile area with a mix of residential and commercial buildings and is the San Fernando Valley’s premier destination for fine dining, shopping, and entertainment. The region is well-known among the locals for having one of the Valley’s biggest concentrations of high-quality sushi eateries. 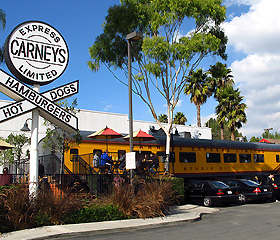 Beeman Park, the neighborhood leisure facility, is located in Studio City and features an auditorium, barbecue pits, a lit baseball diamond, outdoor basketball and tennis courts, a kid’s play area, and picnic tables. In the public parks, they have the second-largest youth baseball program. They also offer a variety of other courses and programs. Moorpark Park and Woodbridge Park, two smaller neighborhood parks, both contain playground equipment and picnic tables.

Visit the close-by Fryman Canyon, which is situated just off Laurel Canyon Blvd. at Fryman, if you’re itching for some time in nature and a chance to go hiking. On a clear day, the nearby fire road offers beautiful views of the Valley as it winds up and over the hills. Additionally, the region is covered in a sea of yellow blooms in the springtime when the mustard flowers are in full bloom. At the trail’s end, you can stroll through a posh residential neighborhood and take in the architecture of the large homes.

In the Los Angeles Unified School District, Studio City is noted for having some of the top public schools, including renowned Carpenter Elementary. Property values and rentals in the 91604 zip code are greater than in many of the neighborhoods around as a result of how desirable this location is to live in.

Once farmland, Toluca Lake is now an upscale living, dining, and shopping community and has been home to some very famous residents over the years, including the much-loved Bob Hope. It’s sandwiched between Burbank and Universal City and the main drag is Riverside Drive. There are a number of small shops and a variety of restaurants to choose from with cuisine from all over the world. Unknown to many people there is actually a lake, Toluca Lake, in the neighborhood. It’s a 6-acre body of water that is virtually hidden by the surrounding property. It is owned by those homeowners who have houses that border the lake. Toluca Lake was originally another Native American settlement but after the Spanish conquest, it became part of the Mission Fernando Rey de Espana, until it was taken over by the Mexicans and then finally bought by Isaac Lankershim in 1869. Toluca Post Office was founded in 1893, the name Toluca having been chosen from an Indian word meaning “fertile.” By the early 1900’s the land was being used for agricultural production-peaches, apricots, and walnuts, but the venture finally failed and a development company took over with a mind to create the first “bedroom community” for Los Angeles in the San Fernando Valley. The name was then changed to Toluca Lake.

Toluca Lake is home to a few notable landmarks as well. The oldest Bob’s Big Boy Restaurant, which was established in 1949, still sits along Riverside Drive, serving up its famous burgers, fries, and shakes and even hosts a classic car night every Friday. The local Catholic church, Saint Charles Borromeo has been the site of several celebrity weddings and funerals, including those of Bob Hope and Dorothy Lamour.

Universal City encompasses the 415 acres that make up the property of Universal Studios. A majority of this San Fernando Valley community has remained unincorporated to avoid City of Los Angeles business taxes and regulations. Universal City is predominantly comprised of a 36-floor office building for both Universal and NBC, the Sheraton Universal Hotel, the Universal Studios theme park, and the adjacent Universal Citywalk, as well as the Gibson Amphitheater and all of Universal’s sound stages, sets, and back lots. 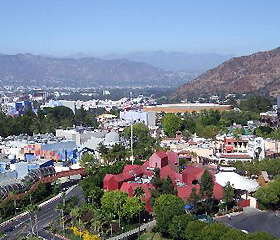 Just across the street from this compound is a Metro Rail Red Line, offering easy access to Hollywood and Downtown Los Angeles to the south, and North Hollywood and other parts of the Valley to the north. Universal City also has the only paid government-operated fire station that falls on private property, Station 51, which is direct across the street from Universal Plaza. There’s a significance to the station number designated to the fire department. In the Universal television series, Emergency!, Station 51 was the fictional fire station in the show.

Universal City became official on March 15m 1915 when it was formed as a filming community by Carl Laemmle, a German immigrant who first came to the U.S. via New York City to join the motion picture business and then made his way west. He had opted to consolidate his filming efforts that were spread out in Hollywood and in the Valley into one location, a haphazard “city,” that boasted a zoo, a post office, and even a soda fountain. He encouraged visits by holding tours throughout the facility. With the advent of talking films in the 1920s, tours of the studio ceased and it didn’t become a tourist destination again until 1964, which quickly brought with it the rise of hotels, a movie complex, and eventually today’s CityWalk.